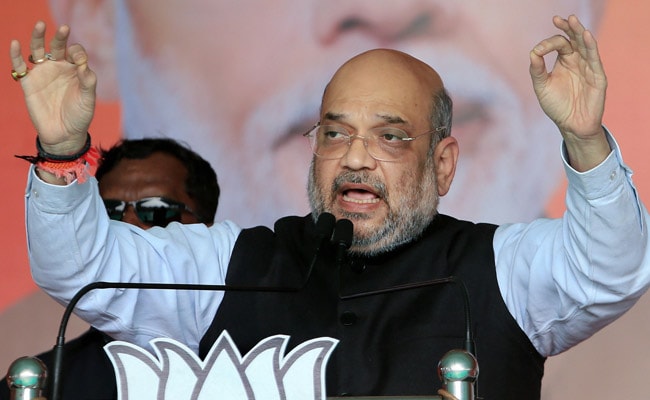 “Rahul Baba and Hemant (Soren) say why talk about Article 370 and Kashmir. Rahul Baba, you do not understand because you are wearing Italian spectacles. Thousands of youths of Jharkhand working in CRPF, BSF and Army have laid down their lives for Kashmir,” Mr Shah said at a rally in Jharkhand’s Pakur.

“The entire country wants Kashmir to be an integral part of the country,” the Home Minister said.

He said that Kashmir has become an integral part of the country after the central government scrapped Article 370, adding “Kashmir is now crown of India”.

“In 10 years of UPA government, ‘Alia, Malia, Chamalia’ used to infiltrate to India from Pakistan and behead army personnel. When Modi became Prime Minister, they (Pakistan) did the same in Uri and Pulwama. They forgot it was not ‘Mauni baba government’ but ’56 inch Modi government’. India did a surgical air strike and destroyed the terrorists.”

“Tell me, can the government of Rahul and Hemant protect the country. India will be safe under the leadership of Modi. Vote for BJP to strengthen the hands of Modi to keep the country safe and protected,” Mr Shah said, addressing the rally.

He also slammed the Congress for keeping the Ram Janmabhoomi issue pending.

“The Supreme Court has delivered judgment and in four months, a sky-touching grand Ram Temple will be constructed. The Congress party can neither develop the country, nor protect it. If you cannot protect the country or respect people’s mandate then why people will give you power,” said Mr Shah.

Mr Shah, during his rally, also tried to win over the OBCs to gain their votes.

“In our manifesto, we have promised to increase the OBC reservation without touching the reservation of Scheduled Castes and Scheduled Tribes,” he said.

He targeted Hemant Soren of the Jharkhand Mukti Morcha for contesting the election in alliance with the Congress.