Protests both violent and peaceful erupted across India on Monday against the police crackdown in Jamia Millia Islamia in Delhi and the Citizenship Amendment Act as students and political leaders took to the streets.

While Prime Minister Narendra Modi called these protests “deeply distressing” and appealed for peace, Home Minister Amit Shah said at a rally in Jharkhand’s Poreyahat that the objective of the Act is to give citizenship to religiously persecuted refugees, and not to take away citizenship of any Indian.

“Some parties are spreading rumours and inciting violence for their political interest. I request students to go through the CAA once and not fall in their trap,” Shah said.

Notwithstanding Shah’s claims, protests erupted in several parts of the country — from Uttar Pradesh to Kerala and Maharashtra to West Bengal — against the Act. The protesters also condemned the police action against students of the Jamia Milia Islamia.

Thousands gathered at the India Gate in Delhi to continue the protest against Delhi Police’s action in the Jamia Millia Islamia university on Sunday. Showing their solidarity with the students, the protesters also read the Preamble of the Constitution, and vowed to adhere to the secularism enshrined in it.

Several Delhi University students boycotted exams and held a protest outside the Arts Faculty in North Campus to express their solidarity with the movement. 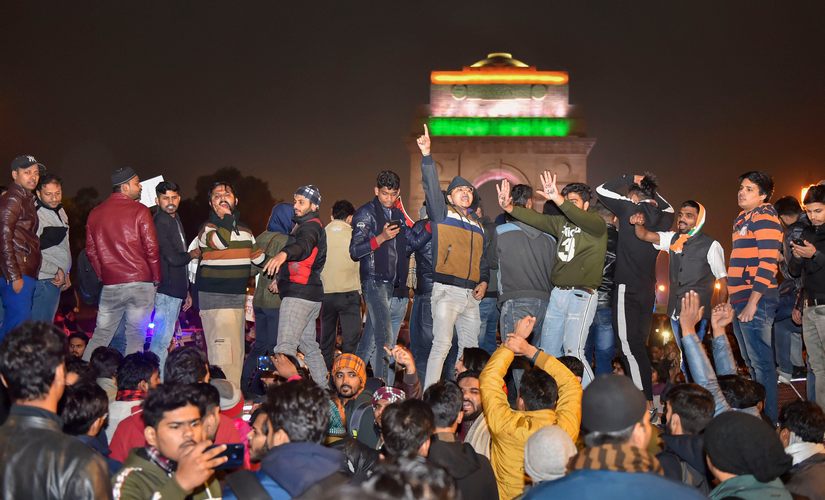 Students stage a demonstration at the India Gate in a show of solidarity with the students from Jamia Millia Islamia. PTI

At ground zero of the student movement, a group of Jamia students stood shirtless in the bone-chilling cold of a December Delhi morning to protest the action against their colleagues on Sunday. Hundreds more gathered on the streets in an orderly manner with some students forming a human chain to manage traffic.

Several students were seen leaving for home but the anger simmered.

“We were inside the university when the police barged in. Around 20 policemen came from gate no 7 and 50 others came from the rear gate. We told them we were not involved in the violence. They didn’t listen. They didn’t even spare women,” Khanzala, who suffered injuries to his legs and abdomen, said.

Jamia Vice Chancellor Najma Akhtar also supported the students, saying police entered the campus without permission. “We will not tolerate police presence on campus. They scared our students with police brutality,” she told reporters, adding that the university will file an FIR on damage to property and police action on students. She also demanded a high-level inquiry from the government.

The police clampdown against the Jamia students became yet another rallying point for a Congress-led Opposition, which is already up in arms against the Modi government over the CAA since its passage last week by Parliament.

Apart from the Congress, leaders of four other political parties held a joint press conference to demand an inquiry by a Supreme Court judge into the Sunday evening incident in the campus.

“It is the Central government which is solely responsible for the violence in the country for bringing a law which is being opposed all over the country and by all Opposition political parties. Had the government not brought this law, there would not have been any violence”, Congress leader Ghulam Nabi Azad said.

Congress leaders, led by Priyanka Gandhi Vadra, also held a silent protest from 4pm to 6pm at India Gate. While Priyanka said “an attack on students is an attack on the soul of India”, her mother and party chief Sonia Gandhi issued a statement later accusing the BJP of  creating instability in the country.

“The BJP is mother of violence and divisiveness,” Sonia alleged in the statement.

Student protesters also demanded a probe into the use of tear gas inside the Jamia university’s library as well as police entering the campus without permission from university authorities. And so intense was the exasperation among the student community that even the country’s premier institutions — IIT Kanpur, IIT Madras and IIT Bombay — which do not regularly join any agitations, came out against the police action.

In West Bengal, Chief Minister Mamata Banerjee took out a massive rally in Kolkata and declared that the CAA and the NRC can be enforced in the state only on her “dead body” while daring the Centre to dismiss her government. Meanwhile, the anti-citizenship law protests snowballed into a major flashpoint in the state with highways and railway lines blocked and incidents of arson and loot reported from many places.

In Kerala rivals UDF and LDF, in a rare show of camaraderie, protested jointly against the police action.

As violence and unrest spread across various states against the CAA, the prime minister said “this is the time to maintain peace, unity and brotherhood. It is my appeal to everyone to stay away from any sort of rumour-mongering and falsehoods.”

Violent protests on the amended citizenship law are “unfortunate and deeply distressing”, he said adding that debate, discussion and dissent are essential parts of democracy, “but never has damage to public property and disturbance of normal life been a part of our ethos.”

Modi said he unequivocally assures people that tweaked law does not affect any citizen of India of any religion.

Stepping in to quell the unrest, the Union Home Ministry asked states and Union Territories (UTs) to take all possible steps to check violence and ensure safety of life and properties.

The Supreme Court, which agreed to hear on Tuesday pleas alleging police atrocities on students holding protests against the act at the Aligarh Muslim University and the Jamia Millia Islamia, said it will not hear this issue in such an atmosphere of violence.

“The only thing we want is that the violence must stop,” said a bench headed by Chief Justice SA Bobde.

Life was thrown out of gear in several places in North East with trains between West Bengal and the North East came to a halt with the railways suspending all services to the northern region of the state, officials said.

In Lucknow’s Nadwa College, students gathered in the hundreds shouting slogans like “Awaz do, hum ek hain” (call us we are all united) as police tried to control the situation. For a brief while, they hurled stones at the police who threw the missiles back over a campus steel gate. In Hyderabad’s Maulana Azad Urdu University, students held a protest march post midnight in solidarity with the Jamia students and demanded that their exams be postponed.

There were angry demonstrations at the Banaras Hindu University (BHU) in Varanasi and at the Jadavpur University in Kolkata with demands that the government take action against police “hooliganism”. Students from the Mumbai University and the Tata Institute of Social Sciences (TISS) protested on the streets shouting slogans such as “Shame on Delhi Police”.

Students at Central University of Kerala, Kasargod and Pondicherry University boycotted classes. Others joining in included students from Patiala’s Punjab University,  Patna University and Chennai’s Loyola College. The first to join the movement against the violence in Jamia were students from AMU where there were clashes with the police late at night on Sunday in which at least 60 students were injured. After the protest, the university announced the closure till 5 January and students were asked to evacuate the hostels.

As videos from Sunday’s violence inside Jamia circulated widely on social media, many spoke out, including from Hollywood and Bollywood. Hollywood star John Cusack was one of those who took to Twitter to air his views. “Reports from Delhi are it was a war zone last night – Fascism  is not a joke – we use the word with the understanding it’s deadly.” Filmmaker Anurag Kashyap, who had quit Twitter in August, returned on the microblogging site, saying he cannot stay “silent any longer”. “This government is clearly fascist… and it makes me angry to see voices that can actually make a difference stay quiet..” he tweeted.

Jawaharlal Nehru University (JNU) students joined their compatriots in Jamia outside the police headquarters at Delhi’s ITO on Sunday night to protest the alleged police assault on students at the Jamia campus earlier in the day. Opposition politicians and activists say the Citizenship Amendment Act, which was passed last week by Parliament, is an attempt to divide the country along religious lines as it grants citizenship to Hindu minorities from the three neighbouring countries. They say such a preference is unconstitutional.

With inputs from PTI